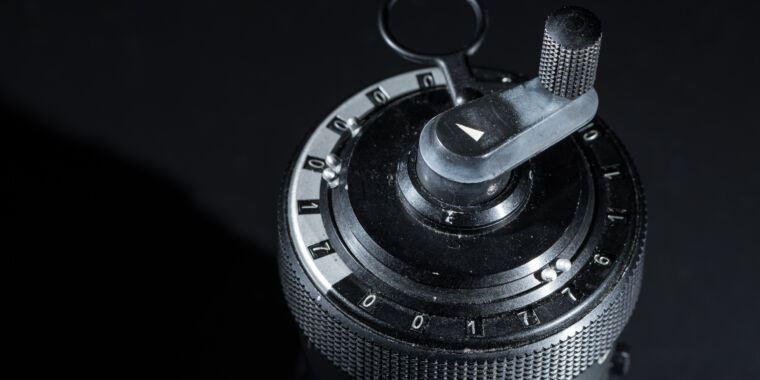 It’s no bigger than a drinking glass and fits easily in the palm of your hand. It looks like a pepper mill or maybe a hand grenade.

The diminutive “Curta” is a striking machine, a mechanical calculator that combines the complexity of a steamboat engine and the precision craftsmanship of a beautiful pocket watch. It first appeared in 1948 and for the next two decades, until it was replaced by the electronic calculator, it was the best portable calculating machine on the planet. And its story is all the more captivating given the extraordinary circumstances in which it was invented.

The idea for the Curta came to its inventor of Austrian origin in the darkness of the Buchenwald concentration camp.

“Is there nothing smaller?” “

Today we take the numbers calculation for granted. Our smartphones have calculator apps, and most of us have a pocket calculator somewhere in our home or office. But it hasn’t always been that easy. For centuries, nothing more than a simple addition was painfully time consuming. The first one slide rules appeared in the 17e century, shortly after John Napier’s invention of the logarithm, but they could only handle a few positions beyond the decimal place. There were also various types of mechanical adding machines, but most were roughly constructed and unsuitable for scientific work. At the end of the 19e century, more reliable desktop calculators began to appear, but they were heavy and expensive.

The faults of these machines were very much in the minds of young Curt Herzstark, whose family specialized in the manufacture and sale of calculating machines and other office equipment. Born in 1902 in Vienna, Herzstark ran the family business in the 1930s. He traveled extensively through Austria, Hungary and Czechoslovakia, selling mechanical calculators to banks and factories.

Thanks to a vast interview carried out for the Charles Babbage Institute many years later, we have Herzstark’s own memories of those busy years. He recalled that as sophisticated as his company’s machines are, “something was missing in the global market.” He remembered meeting architects, foremen, and customs officials who needed calculating machines that were not only accurate and reliable, but also portable.

â€œPeople have said over and over, ‘Yes, that’s good, but isn’t there anything smaller? “, Recalls Herzstark. The slide rules weren’t good enough; his clients wanted precise numbers, not approximations. Just taking existing designs and reducing the size of individual parts would not do the trick; the keys and knobs would be too small to use. A radical overhaul was needed.

“What does this kind of machine really have to look like for someone to be able to use it?” It cannot be a cube or a ruler; it has to be a cylinder so that it can be held in one hand, â€Herzstark said. “And if you can hold it with one hand, then if it’s miniaturized, you can adjust it with the other hand … I started to design the ideal machine from the outside first, before designing inside. “

Herzstark began to experiment with “sliders” that wrapped around a cylinder so that numbers could be entered by moving a thumb or finger. He also felt that there should only be one calculation mechanism, as long as each input digit could access it. At the heart of the apparatus would be a single rotating “step drum”; the drum would have two sets of teeth, one for addition and one for subtraction. A central crank spun the drum, and it was enough to move the position of the drum a few millimeters to switch between the addition and subtraction functions. Multiplying and dividing was a bit more complicated, but still only required a few strokes of the cursor and a few turns of the crank.

By 1937, Herzstark had worked out the bulk of the design; after that it was just a matter of machining the parts and building a prototype.

And then Hitler came to power.

On March 12, 1938 Austria was annexed by Nazi Germany (during the event known as the Anschluss). Herzstark, the son of a Jewish father and a Catholic mother, feared the worst, although during the following years the factory was allowed to continue operating, as long as it produced machines and tools for the German army. But the situation quickly deteriorated. Two colleagues were arrested for listening to British radio stations, and when Herzstark was offered to testify on their behalf, he too was arrested.

The conditions were horrendous. â€œWhen they hanged someone,â€ Herzstark recalls, â€œwe had to watch until he finally died. Terrible. They were hanging people to die slowly, a miserable death. Herzstark was put at work in an adjacent factory that made components for German V2 rockets, and finally a senior German engineer took him aside.

For the first time, Herzstark began to imagine that he could survive the war.

â€œSee, Herzstark, I understand you were working on a new thing, a little calculating machine,â€ the engineer said. “Do you know, I can tip you. We’ll let you do everything and draw. If it’s really worth anything, then we’ll give it to the FÃ¼hrer as a gift after winning the war. Then, surely, you will become an Aryan.

For the first time, Herzstark began to imagine that he could survive the war. “And there I started to draw the Curta as I had imagined it,” he said.

Buchenwald was liberated by American troops on April 11, 1945. A few days later Herzstark walked to the town of Weimar, about four miles away, with the plans of his calculating machine in his pocket. He found a factory that was still running, and soon after he had a prototype of the machine.

Soon, however, the Soviet army arrived. Herzstark retired to Vienna, carrying only a box containing the dismantled parts of the apparatus. With European industry struggling in the post-war years, Herzstark was happy to see the government of little Liechtenstein showing interest in his machine. A company called Contina AG Mauren was formed, with Herzstark as technical director. The first batch of Curtas went on sale in 1948. A slightly larger model that could display more digits, the Type II Curta, appeared in 1954.

The Curta was popular with accountants, engineers and surveyors. Rally car navigators loved it because it could be used by touch; an experienced user did not even need to look at the device. Peter Boyce, a retired astronomer who worked for many years at the Lowell Observatory in Arizona, used a Curta when he was a graduate student at the University of Michigan in the 1960s. He remembers it as â€œA wonderful precision machineâ€, particularly useful outside the office. “It was good to take it to the telescope, where I used it in place of pencil and paper if I needed to calculate something at 2 am.”