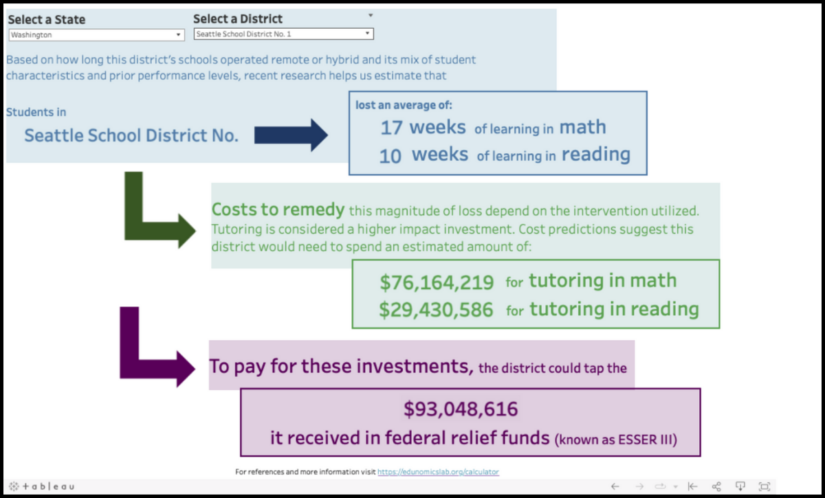 Back when districts were writing their ESSER plans, most did not have the information we have today. Many did not yet know how different types of students fared with distance or blended learning and so developing plans to address these losses was a struggle.

But new studies fill in the gaps. We now know that school closures in response to the COVID-19 pandemic have harmed students academically. A recent paper from the National Bureau of Economic Research (NBER) demonstrates that the longer schools remained closed or operated in a hybrid model, the greater the losses, especially for black and Hispanic students, those in poverty or those who were behind in school. start with.

It may be obvious, but disadvantaged students who have learned less will need more help moving forward.

So how much help will students need? We used the results from the NBER article to create a new calculator that estimates learning losses in more than 8,000 school districts across the country. We have incorporated student demographic information and teaching style data from the American Enterprise Institute’s Back to Learn Tracker. District leaders can use “The Calculator” to estimate the level of student learning loss in their schools.

For example, public schools in Seattle were fully isolated for three quarters of the 2020-21 school year. Given the composition of its student body, available research would estimate that the average student in the district lost an average of 17 weeks of learning in math and 10 weeks in reading. Some lost more; some lost less.

Our calculator also compares estimated learning losses with the amount of money a district would need to spend to address them. We used available research on the effect sizes of tutoring (a high-impact investment) to estimate these costs. By our calculations, Seattle leaders would need to invest approximately $105 million to address learning losses in their community.

Fortunately, Congress provided school districts with three rounds of federal relief funds totaling $190 billion. In the last round, Congress ordered districts to spend at least 20% of their funds to address student learning loss. In Seattle, the third round of relief funds totaled $93 million; it’s money the district can use to get students back on track, if spent effectively.

In general, the poorest districts suffered the greatest learning losses, but they also received the most money from the federal government. Detroit students, for example, lost about 17 weeks of learning, but the district received more than $800 million in the latest round of federal funding.

Wealthier communities have received less federal support, so they may have to dip into their own funds to deal with academic losses in their schools, especially if their schools have been closed longer. For example, Fairfax, Virginia is one of the wealthiest counties in the country. But the district kept its schools closed for six months and its students suffered losses equivalent to 16 weeks of math learning and 11 weeks of reading. To offset this, we estimate the district will need to invest approximately $343 million, significantly more than it received in federal relief funds.

Our estimates are projections based on large-scale analysis and effect sizes from previous years, which amounts to this – a best estimate available in the absence of actual student data for each district. Districts should monitor their own real-time data to see if students are making progress. The state of Tennessee, for example, released results earlier this month sharing the progress its students are making, likely in response to investments there in tutoring and other supports. Meanwhile, places like Chicago and Newark are still seeing very steep drops in student performance compared to where students were before the pandemic.

We should all be making sure that school districts help students recoup lost learning time. Research on past educational disruptions suggests that short-term interruptions to schooling can have lasting effects on children. Even 1-3 months of learning losses can interrupt future learning, graduation rates, and persistence in college and careers. We know that these gaps will have permanent impacts on students’ lifetime earnings. One estimate put the magnitude of the losses at $2 trillion. Still other studies have linked missed learning time to increased rates of physical disability and greater reliance on government welfare.

Schools don’t have much time to fix these holes. The students are getting old. For those who are academically behind previous generations, district leaders must invest wisely to close these learning gaps. We are concerned that some districts are not yet addressing these losses in a way that addresses the scale of the problem. In Los Angeles, for example, the district negotiated 4 optional school days as a remedy for what the calculator calculates as a loss of 22 weeks in math and 18 weeks in reading. That won’t be enough.

The good news? Most districts still have plenty of relief funds to spend. Rather than wasting time rehashing the school reopening debate, we need district leaders to take stock of where their students are and invest their money now in a way that students recoup those math losses. and in reading.

Responsible for an ex’s student loans? You will like this law passed by the Senate