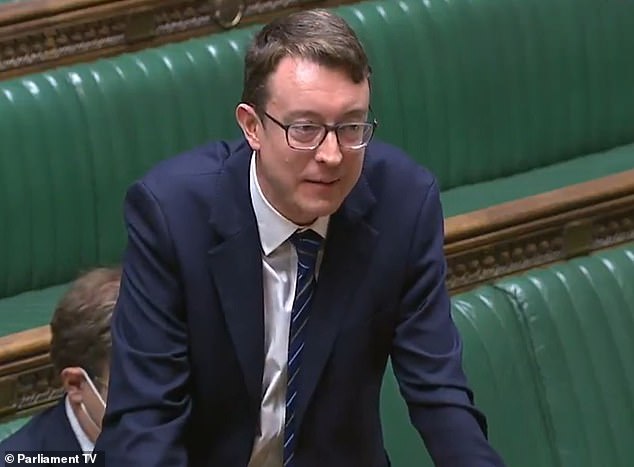 Simon Clarke was minutes away from his first big appearance at the Shipping Box and already the new Treasure Boy had the House folded in half.

How they laughed. There were honking, screaming and a lot of knee banging. Even the president cradled in his chair and clapped his hands.

Such a reception would generally be a cause for rejoicing for a nervous and wet minister behind the ears seeking to make his mark.

The problem for the Treasury Minister, Mr Clarke, was that the chamber was laughing at him rather than him.

He was answering an urgent question about all those loose pre-budget briefings that have been going on all week.

Simon Clarke was minutes away from his first big appearance at the Shipping Box and already the new Treasure Boy had his house folded in half, writes HENRY DEEDES

The Treasure has been more elusive than a broken colander, giving details of what to expect today right down to the type of chocolate Rishi Sunak plans to munch on.

The only surprise is that the tongue-wagging mandarins still haven’t told us what skimpy color the Chancellor plans to wear.

Not that Mr. Clarke knew about all of this, of course. Goodness, no. With the haughty and butterless innocence of a cherub-cheeked prince, he haughtily informed the House: “I will not comment on the leaks.”

Report the hysterical rash. Even some of Clarke’s fellow Conservative MPs were howling like a pack of mad coyotes. Poor Clarke. It was hardly his fault. He hardly had the opportunity to unpack his calculator at the Treasury and there he replaced the Chancellor.

Some novices might have been tempted to remind the House of this. Instead, he did the only thing he could – stand up straight and accept every rotten cabbage that got hit on him.

By the way, standing up straight is something Clarke – at 6ft 7in – does well. Take off the wobbly glasses and he could pass for an NBA superstar.

The mischievous guys claim Boris only sent him to the Treasury to make Rishi (5ft 6in) feel even more nervous.

Clarke’s tone was sorry without ever apologizing. He spoke of communicating with the public on how his money was going to be spent and insisted that none of the restrictions on the budget embargo had been broken.

â€œIt’s a matter of judgment! Shouted Sir Lindsay Hoyle, pictured below, who has made known his furious feelings about the Whitehall infiltration.

Labor benches welcomed Mr Redwood’s remarks. Not something we see often. Jake Berry (Con, Rossendale) wondered if we could expect to hear something today that hadn’t already been reported.

The most explosive intervention came from Angela Eagle (Lab, Wallasey). Usually Ms Eagle speaks with the enthusiasm of a British Rail announcer approaching retirement. Yesterday she was scolding. ‘Contempt!’ She cried. “Shameâ€¦ excuse me!” “

â€œIt’s a matter of judgment! Shouted Sir Lindsay Hoyle, pictured, who made known his furious feelings about the Whitehall infiltration

Clarke timed a rare moment to make a joke. “As a former treasury minister herself, I am sure she would never have engaged in such activity,” he said.

Ms. Eagle’s humor tends to be quite selective. She rarely sees much joy in anything and yesterday was no different. ‘No!’ She screamed. ‘Shameful!’

Mrs. Truss, at the risk of sounding like a promotional film from the 1970s, is a minister on the move. Barely a week goes by without her appearing in a glossy photoshoot. Plus, she’s upped her social media game and is launching a new relaxed haircut.

Yet despite all the postures, she lacks authority. Someone unfamiliar with politics and who watched it yesterday would have found it difficult to identify her as the senior minister in her department.

This is not a problem that Priti Patel would ever have. Nor Rishi Sunak for that matter. The latter remains the king in waiting but let’s see how the budget behaves today. I feel like it might be a while.